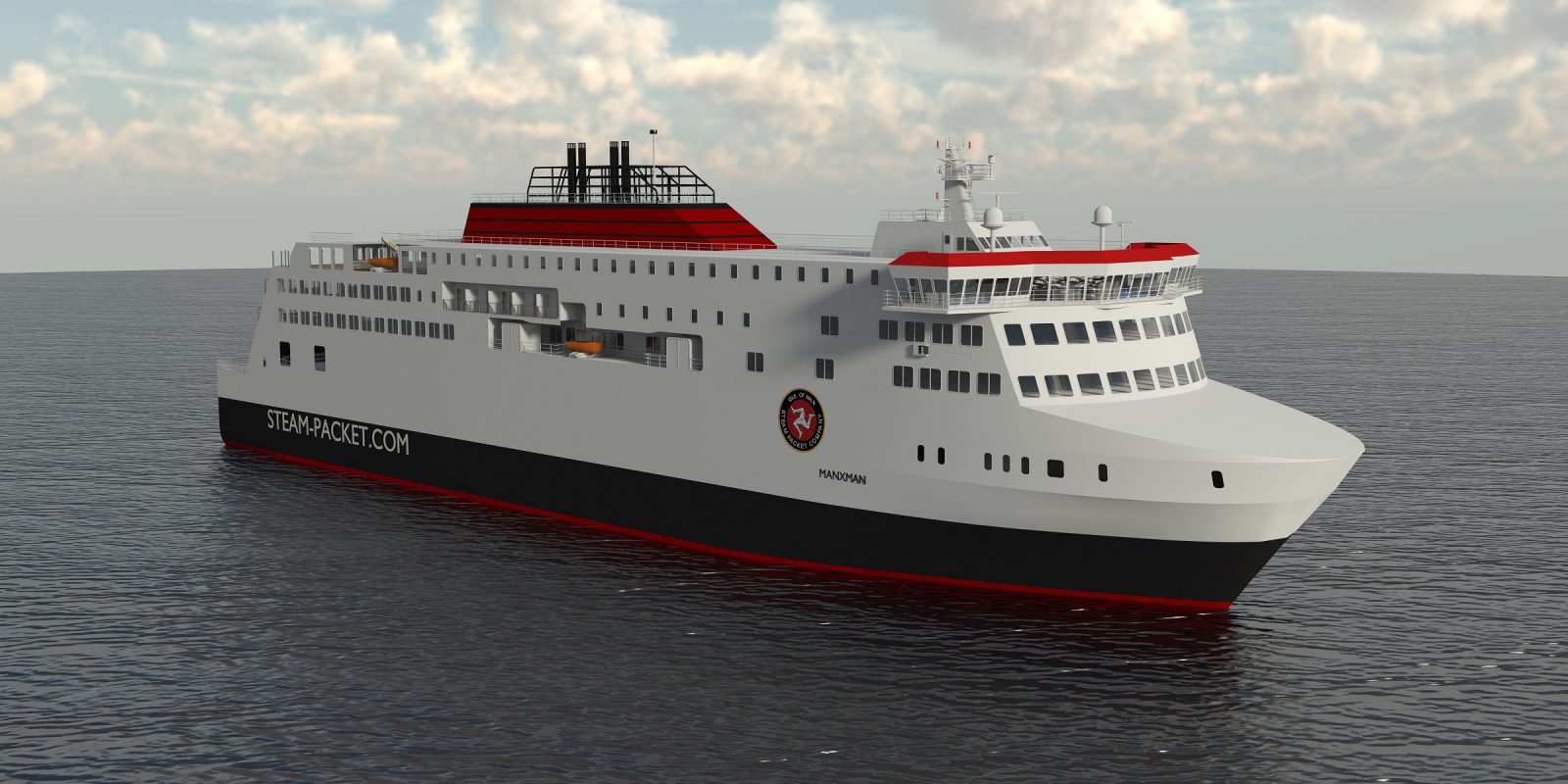 In March 2019, a new Sea Services Agreement was finalised between the Isle of Man Steam Packet Company and Department of Infrastructure, laying the framework for future investment in the Island’s lifeline sea links. It set the wheels in motion to construct a replacement vessel for our conventional ferry, Ben-my-Chree, and we have since been busy progressing plans for the exciting new development.

We would like to keep our customers, fellow Islanders and friends up-to-date by sharing the progress of this bespoke new build through this blog. Below is its story so far, starting with the most recent and moving backward in time, with lots of milestones yet to come. Keep an eye out for future updates!

Senior Chief Engineer Dean Ellis had the pleasure of pressing the start button and the engine fired on the first time of asking. Since then, three other generators have been started successfully.

Safety protection devices are also being tested, ahead of the starting of the generators which will power the vessel’s switchboard, and the commissioning of the power management systems.

A huge milestone in the build of Manxman has been reached. The custom-built vessel was floated at around 0830, Korean time, on 14th June, as per the timeframe laid out in the contract signing on 30th July 2020. In spite of COVID-19, travelling restrictions and closed borders, the HMD shipyard were still able to keep to the schedule as set out by them two years ago.

After performing successful leakage checks Manxman was taken by tugs to an outfitting berth where internal works will continue including electrical works, commissioning of machinery and equipment and interior outfitting.

With Isle of Man Steam Packet Company representatives having been present in South Korea throughout the build, this was a very exciting moment for those involved in the project. Seeing her launched and progressing onto the next stage of build is down to everyone’s hard work and determination, of which the Company is very thankful for and proud of – it’s a remarkable achievement.

A ceremony to mark the occasion was attended by representatives of IOMSPC site team and shipyard management including HD Shin, President and CEO of HMD, who presented Jim Royston, Fleet Operations Manager and Project Manager from The Isle of Man Steam Packet Company, with the official certificate of launching.

May: Installation of Accommodation Block

In May 2022, the erection of the accommodation superstructure was completed. The largest block on Manxman is the aft accommodation block weighing a staggering 400 tonnes – the upper limit of the dockyard cranes!

After months of construction and skilled engineering to get the structure to this stage, Manxman officially floated in April 2022.

This time-lapse shows the construction of one of the engine room mega blocks during the installation of large propulsion equipment. This technical procedure includes many stages and is instrumental in the ships build. Check it out!

The four main generator engines have been delivered to HMD from Wartsila in Finland and installed into the engine rooms, along with other large items of machinery such as sewage treatment plants and the main switchboards. The vessel has grown to her full length and at the forward end, construction is up to deck 5 level out of nine covered decks. When Manxman is completed deck 5 will be the upper car deck.

A momentous milestone in the development of Manxman was marked on Friday 24th December.

The keel-laying ceremony, which traditionally invites good luck in the construction of a ship and throughout her life, marked the beginning of her formal build at Hyundai Mipo Dockyard in Ulsan.

The first of 36 mega blocks were laid in dry dock number 4, which forms part of the forward engine room, weighing 215 tonnes. Two further blocks also joined the first in the dock, with welding and connecting able to commence.

In collaboration with SMC Art Consultancy, we are excited to be commissioning a specially curated artwork collection to go on permanent display on Manxman.

The collection will be a celebration of the Isle of Man’s creative output, heritage, landscape, and community, with professional and amateur locally based artists, who are best placed to tell the story of our Island, invited to submit proposals.

The construction of Manxman continues to progress at a fantastic pace with nearly all blocks complete. The quality of steel work and pre-outfitting is highly impressive at Hyundai Mipo Dockyard.

Check out our latest photos of some of the steel blocks under construction.

This coin will be placed under Manxman’s keel block and is a centuries-old tradition regarded as a symbol of good fortune, thought to bless a ship while it is built.

The coin, which depicts a ship, was chosen due to its reference to the Island’s strong maritime history, and will be taken to South Korea by Lars when he visits Hyundai Mipo Dockyard in 2022.

More than 80% of Manxman’s blocks are constructed and either in the process of being painted or at the pre-outfitting stage, where cable trays, pipes and ducting etc are installed. Once all blocks are complete, it will be time for the build to commence.

Check out this video simulation showing how Manxman will be constructed, block by block. This offers an insight into how Hyundai Mipo Dockyard can build a vessel so quickly and efficiently.

Following the commencement of Manxman’s construction in August, work on the vessel has been progressing well at Hyundai Mipo Dockyard.

Eighty per cent of the steel has been cut, with numerous blocks already completed. Check out the photos below showing some of the block under construction.

A number of key stakeholders were in attendance at the milestone event – known as the steel cutting ceremony – on site in Ulsan, where a formal pushing of the button took place to mark the first piece of steel being cut.

This signifies that the detail design of the vessel – comprising a total of around 300 detailed plans – has been finalised and construction can officially commence. Plasma files are produced from the approved construction drawings to allow the shipyard’s plate cutting machines to automatically and accurately cut each piece of the vessel.

On Tuesday 17th August, a productive kick off meeting took place ahead of the commencement of Manxman’s construction at HMD Head Office in South Korea. Representatives from the Steam Packet Company, HMD Project Team, Houlder Naval Architects, Sea Quest Marine Project Management and Health, Safety and Environment and Quality Assurance were all in attendance.

This important meeting between the project team and project stakeholder is an opportunity to lay the foundation for a successful project and ensure all parties are on the same page in terms of scope, goals, budget, timeline and everything in between.

After much deliberation, it was revealed on Tuesday 1st December that the name of the vessel will be Manxman.

More than 7,500 people submitted their favourite from the shortlisted names, the results of which played a key part in the selection process. Manxman and King Orry emerged as the most popular choices by a considerable margin. The two favourites were then considered further before the name Manxman was chosen.

This will mark the third ship in the Company’s history to bear the name, the last a turbine steamer launched in 1955. It is a name that embodies the Manx spirit, signifies national pride and is suitably enduring for a vessel that will take the Steam Packet Company into its 200th year and beyond.

Keen to intertwine a key piece of the Company’s 190-year history into our next chapter, it was decided early on that the new addition to the fleet would take a traditional Steam Packet Company vessel name.

After many months of consideration, our team whittled the selection down to four fondly remembered names which we believe to be the most fitting. The shortlist, which was revealed on Thursday 29th October, comprised the names Manxman, Mona’s Isle, Manx Maid and King Orry.

We recognised the significance of ensuring everyone had the opportunity to have their say which is why we were keen to hear from the public on this important decision. Throughout the month of November, people had the opportunity to submit their favourite out of the four names so this could be taken into consideration during the selection process.

JULY: BOARD DECIDES ON PREFERRED SHIPYARD

After months of extensive discussion and deliberation, the Steam Packet Company Board of Directors made a decision on a chosen shipyard. It was decided that the new vessel will be constructed at one of the world’s major shipbuilders, Hyundai Mipo Dockyard (HMD) in South Korea.

The shipyard selected is one of the world’s leading blue chip names in the industry, with a proven track record of delivering vessels on time, to budget and to its trademark high standards.

Throughout June, our team spent time fine-tuning the designs of the vessel and incorporating the results of the survey – and our customers most valued preferences – into the designs, where it was possible to do so. While there are many technical considerations that need to be factored in when designing a new vessel, one of our top priorities is ensuring it meets the needs of our passengers and the results of this survey formed an important part of that.

In April, we released a detailed summary of the survey findings following our analysis. It was found that the following on-board services and facilities were considered important by our passengers:

A full summary of the facilities and services that travellers would most like to see on the Heysham route can be found here.

In February, our senior management team undertook visits to the shortlisted shipyards. Selecting a shipyard is one of the most crucial decisions of the shipbuilding process and requires a careful and quantified approach. There are a huge number of factors to take into consideration and we had to be thorough in our approach to ensure the most suitable shipbuilder was selected. The shipyard visits played an important part in this.

Between January and April, our focus was on conducting a detailed analysis on the findings of the survey and working out priorities for the new vessel. We were keen to gain a better understanding of our passengers’ travel preferences so we could factor this into the design where possible.

To help us understand what is important to our customers and gauge public views as we prepared for major investment in our fleet, we launched a survey in November 2019. Island Global Research was commissioned to carry out the research, with the aim to identify which on-board facilities and services were considered most important to our passengers.

We were overwhelmed with the positive response with around 8,000 people contributing.

OCTOBER: OUT FOR TENDER

In the autumn of 2019, we issued a tender to shipyards around the world, inviting expressions of interest to build the bespoke vessel. We received an encouraging response from a range of specialist shipbuilders, and the team then had the task of reviewing and assessing each submission and whittling the selection down.